The United States was anxious to settle these new lands.  The Congress decided to give land  to the veterans of the Revolutionary War as payment for their service. The first to take advantage of this plan was the Ohio Company, led by Gen. Rufus Putnam. Their settlement, Marietta was the first permanent settlement in the Northwest Territory.

Congress gave sections of the Ohio Country  to states like Connecticut and Virginia, who would then award them to Revolutionary War veterans from their state. A big section of land west of the Scioto River which includes the western half of  Ross County was given to the state of Virginia.  This was called the Virginia Military District.

Marietta, Ohio’s First Permanent Settlement-Marietta was the first of many Ohio towns to be settled by land speculation.  The Ohio Company of Associates, was formed by a group of Massachusetts men with the purpose of land speculation in the Northwest Territory. Many settlers purchased land with their land warrants, still others acquired free land in the Donation Tract.  With the arrival of Territorial Gov. St. Arthur St. Clair, the Territorial Secretary and judges, Marietta became the seat of government in the Northwest Territory.

Migration to the Ohio Country

Benjamin Stone Comes to OhioBenjamin Franklin Stone tells of his family’s trip from Massachusetts to the newly settled Northwest Territory in 1790.    Based on his autobiography “Reminiscence of An Early Ohio Pioneer”

It Was a Scary Time Benjamin Franklin Stone remembers the scary times living on the Ohio frontier after the Big Bottom Massacre of January 1791.

This feature length historical documentary is the story of the Ohio Company of Associates, a group of Revolutionary War officers and soldiers, and how, in 1788, they first opened the door for westward expansion of the new United States.  At Marietta, Ohio, they began the first legal, organized American settlement in the old Northwest Territory. Divided into 12 chapters which can be watched individually.  Please contact Julie Lambert for a copy.

Danger Along the Ohio by Patricia Willis                                                  Traveling down the Ohio River in 1793, Amos, Clara, and Jonathan are separated from their father during a brutal Indian attack.  The three children are swept down the river, and must make their way back through the wilderness in the direction of the Marietta settlement, hoping to find their father there.  Their plight becomes still more dramatic  and dangerous when Amos rescues a wounded Indian boy from the river.  Though the boy mistrusts them and his condition slows them down, Amos refuses to leave him behind to die.  Now more than ever, it seems they’ll never make it back to their father and to safety.  Available at Amazon.com 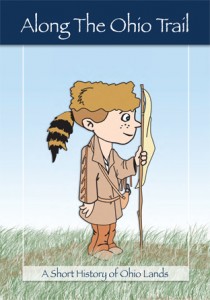