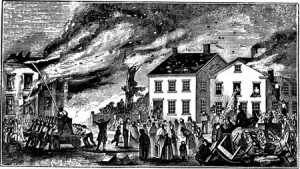 April 1, 1852 started as a pleasant but windy spring day in the city of Chillicothe.  By day’s end, two city blocks of homes and businesses were in ashes.  An uncontrollable inferno quickly spread, devastating to the downtown area.  Although the area around the canal seemed to be rebuilt quickly, it was years before the town’s economy recovered.

*Farmers throughout the area prospered by selling their corn, wheat and livestock.

*Mills sprung up along the canal to grind the farmers grains.

*Merchants were able to provide their customers with a greater variety of merchandise, which in turn created greater profits for them.

*A number of the buildings and grand homes that still line our downtown streets were built by the merchants and business people who profited from the commerce brought to our community by the canal.

*An improving economy also meant jobs for many.

The Canal Era was a great period in our community’s history!

Kids Guide to the Ohio Erie Canal –  Explanation of many aspects of the Ohio & Erie Canal in Chillicothe:

*Economic need for the canal

*Economic benefits of the canal

The Canal – Its Rise and Fall in Ross County by John Grabb.  Interesting insight into seventy-five years of canal transportation in southern Ohio and its effect on the economy.

Ohio and Erie Canal Motor Tour, Circleville to Chillicothe by Martha Gerber Rittinger.  Explores what was and still is remaining of the canal bed along Rt. 104.